We were having so much fun. It seemed so innocent at the time. Kéa had been a rock star and worked her ass off all day. We pulled vines out of windows, cleaned gutters, cut back Jurassic growth, fought off black mold with gallons of bleach, and even built a beautiful guillotine for our renters should they decide to seek their damage deposit.  After day one of slaving away in 90 percent humidity we needed to hit the beach and enjoy some play time in the ocean. The surf was up.

Day One! In the books. We made so much progress. Feeling good, we decided to head back to our overpriced VRBO,  grab our surfboards, and head to Narragansett Town Beach. The passing thunderstorm had produced some chest high swell and it was time to play in the waves. I caught a few nice lefts and successfully snaked Kéa on her boogie board enough times to get her to switch out her foam kick board for a proper fiberglass classic 9’6″.  She was keen and paddled into some formidable waves. It was exciting to watch this kid actually catch some decent swell all on her own. Until it wasn’t.

No good deed goes unpunished. This kid was really surfing. She hadn’t quite found her feet atop the board as the wave pitched, but she was the motor as the longboard glided into the face of a legit wave. Brimming with pride, I shouted behind her to “paddle! paddle! paddle!” and watched as she disappeared behind the shifty mound of rolling ocean. And then disaster.

Red board. In the air. No Kéa. No red board. And finally, red board. Red Kéa. Red hair. More red than it should be. I could tell immediately from her expression that things were not ok. I waded through the breaking surf for an initial assessment. Breathing? Yes. Seeing? Yes. Normal roll and underwater hold down? No. Will this get better with a hot chocolate and some gummy bears? No. Do we need to high-tail it to the Emergency Room? Yes.

Still in my wet suit, I grabbed Kéa’s hand and labored through heavy sand to the crest of the dune where Scotty and Diana had set up shop. Diana had gone on walkabout and Scotty had been watching our misadventure from cute father-daughter postcard to your-wife-is-going-to kill-you. Scotty flipped me the car keys and I didn’t break stride until Kéa and I reached the parking lot.

The gash in Kéa’s head ended up being about an inch. We waited in the ER for over an hour. Me barefoot in a half-off wetsuit-no-shirt and Kéa in her still dripping rash guard. An emergency is an emergency, and I didn’t stop to change or even grab a towel. En route I passed a car that failed to successfully make a left turn on a yellow light. There are times where instinct kicks in and combat driving skills take over. I’m not condoning my actions, but in my defense there was A LOT of blood.

After four hours of holding multiple gauze pads and ice to my wailing child’s head, Kéa walked out of the hospital three staples to the skull heavier. She was a trooper. At times we joked about her surfing prowess and I truly believe that Kéa spent most of the four hours trying to calm ME down. As the father somewhat* responsible for the incident, I rattled more from shock than my daughter. 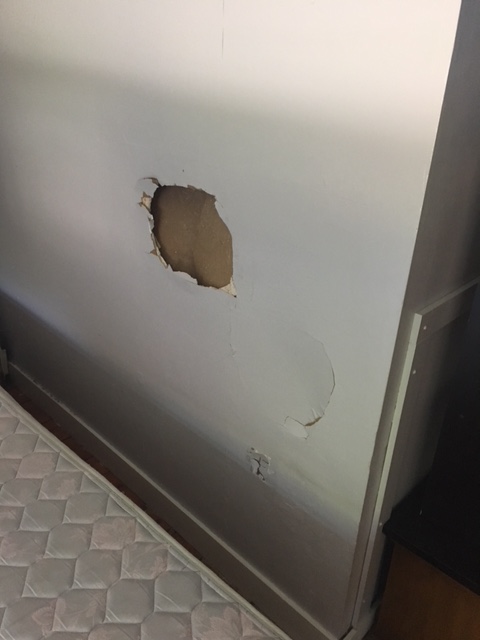 Today was amazing. Kéa passed the time recovering alone at our VRBO. Diana has hinted that she may speak to me again at some point in this trip. I applied for and was denied a Home Depot Credit Card. I activated my mother-in-law’s Mercedes car alarm. We met with a credit union loan officer who may or may not issue a home equity line of credit. OH. And by the way….our house is unbelievably trashed. I can’t wait for tomorrow.

One thought on “Day One. Crushing It…..”