Sunday happened. It was a nice day of forced relaxation while navigating our home construction site like a horse with blinders. I managed to focus on the frivolity of enjoying running water in a detachable sink rather than what a complete disaster our kitchen has become. We’ve been altogether consumed by our Pandora’s Box of a house. With our noses pressed to the grindstone, we literally haven’t had a second to look up. That is, until Monday morning.

Standing in front of our counter-less breakfast bar massaging my aching neck, I looked up and posed the question first. “…Why is the ceiling black?” It was an innocent question at first. But the longer I stared, the more it appeared to resemble the soot shadow of an RPG attack. Then we heard Dave The Floor Guy take notice. “Jee-Suhs! That had to be one helluva kitchen fye-ah!” Upon this new revelation, it took less than three seconds for Diana’s head to spin an entire 360-degree revolution and begin speaking in tongues while reaching for her cell phone. While some of what was being said was unintelligible, the next five words were not.

“You gotta be FU*CKIN KIDDING ME!” The hits just keep coming. Including blows to our pocketbook. We’ve been trying to clean up our language, and made a deal with Kéa to pay her $10 every time we use a four-letter word. It’s been a very expensive month. Unfortunately for Kéa, Dave The Floor Guy neglected to enter into our agreement. There is no possible way to produce enough F-bombs for Dave. If it’s a bomb, and it’s fabricated with the letter F, this guy is going to throw it. All day every day, regardless of kids or grandmothers in earshot. 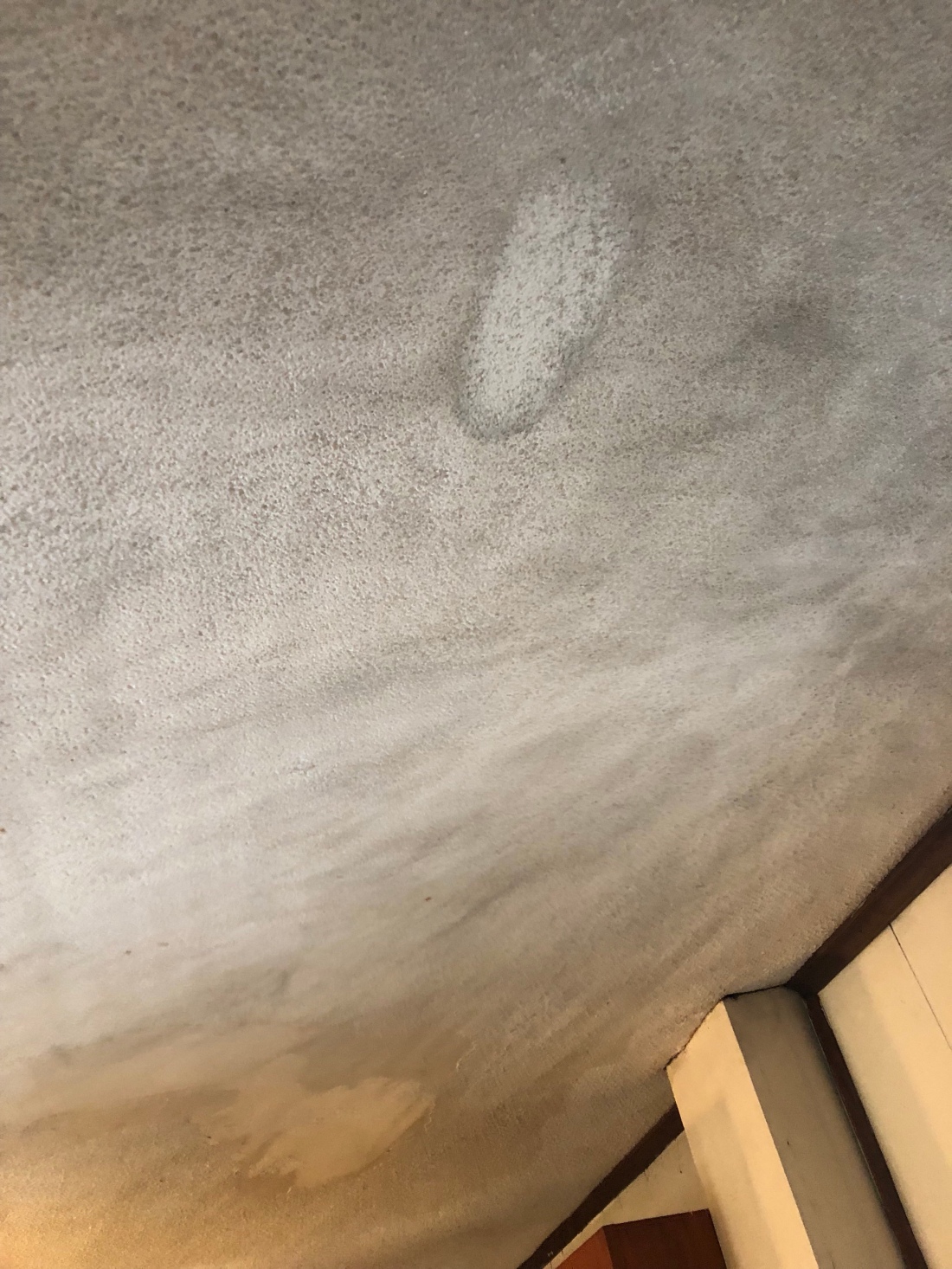 While cleaning out the basement last week, I remember coming across an empty fire extinguisher. At the time I thought it was odd. Why would this fire extinguisher be empty? Did these guys just shoot it off in the back yard for fun? Did they experiment with the trigger to see if it works? No. They depleted our fire extinguisher because they set my fu*king kitchen ON FIRE! Who were these demon spawn renters and what hole did they crawl out of? Oh right…that would be my hole. And now I have to paint it.

Monday was unjustly absorbed by painting the kitchen ceiling. I did my best to help, but made a fantastic wreck of everything I touched. Luckily for Diana, my phone rang. It was Dawn from Greenwood Credit Union. It turns out that wiring funds is more complicated than originally thought. This was bad. I still owe the second half of our countertop installment and all of the floor repairs. Today. As the world around me began to pivot, Dawn let me twist in the wind for a long confounding minute. And then she mentioned something about a check.

“A check?” I responded. “Like a check I could drive up, collect, and even cash? Today?” This was good. With the world coming back into focus, I told Dawn I’d see her at 1 pm and raced out the door. Forty-five minutes later I pulled into the bank parking lot, loitered in the lobby for Dawn, and in due time received an envelope.

$5000 in cash…in my possession…for an entire 60 minutes. It was a spiritual hour for me. Alone. Driving a Mercedes-Benz. Fifty one-hundred dollar bills in my pocket. I wondered if this is what being a rock star might feel like. Except it couldn’t be. Because rock stars don’t drive their mother-in-law’s weathered German sedan. And when they blow five grand in under sixty minutes, they can get five more in sixty seconds. That’s not me. Not even remotely. What was briefly mine is now helping to power the economic engine of South County Rhode Island. Half went straight to Arnold Lumber for the countertops and the other half went to Dave The Fu*king Floor Guy.

Diana did a good job of painting over the evidence of our house nearly burning to the ground. Dave made some fu*cking progress with the fu*king kitchen floor and hopes to get a fu*king coat of poly on “that thing” soon. With so much happening in our kitchen, we haven’t been inspired to utilize it for actually producing meals. The cheapest dinner in town by far is Dragon Palace. The three of us can eat for two days on $7.50. We have leftovers, but no microwave. Our renters spent 45 minutes cleaning theirs and absconded with the only appliance they didn’t destroy when they slinked away last week. Time to head to Marshall’s.

Marshall’s has everything. Except microwave ovens. In the time it took me to realize that I was barking up the wrong tree, Diana and Kéa had managed to fill a shopping cart with three lamps and some other random stuff I still can’t properly identify. This would be ok if I had been able to find a microwave, but I failed miserably. We wheeled our plastic cart of lamps and miscellanea to the check out line…that wrapped 60 people deep around the back of the store. Why the entire population of Narragansett had descended on Marshall’s at 5:30 pm, I’ll never know. All I did know is that Monday needed to end.

Eventually we found our way to a register and paid for our lamps. When I slid my debit card, a message from Marshall showed up on the PIN pad that said “Irresistible Finds,” which after the last month I immediately transposed into “Insufficient Funds.” I snapped my head back and said something that resulted in Kéa being $10 wealthier before realizing that the transaction had been approved. Thank God. We checked out and took our new lamps straight to the beach.

Our daughter was given her daily 45 minutes to enjoy herself and we cooled off after another day of hell. It’s now Tuesday. There is no possible way this project will be completed by Friday. Diana and Kéa changed their tickets to stay for another week, but with a new boss and five incoming freshmen, I have to get back to Alaska. My flight leaves Friday. As much as I’ll be happy to remove myself from the madness, I’ll be sad to leave the girls and miss seeing the finished product. Dave says that the fu*king floors will be “smokin!” 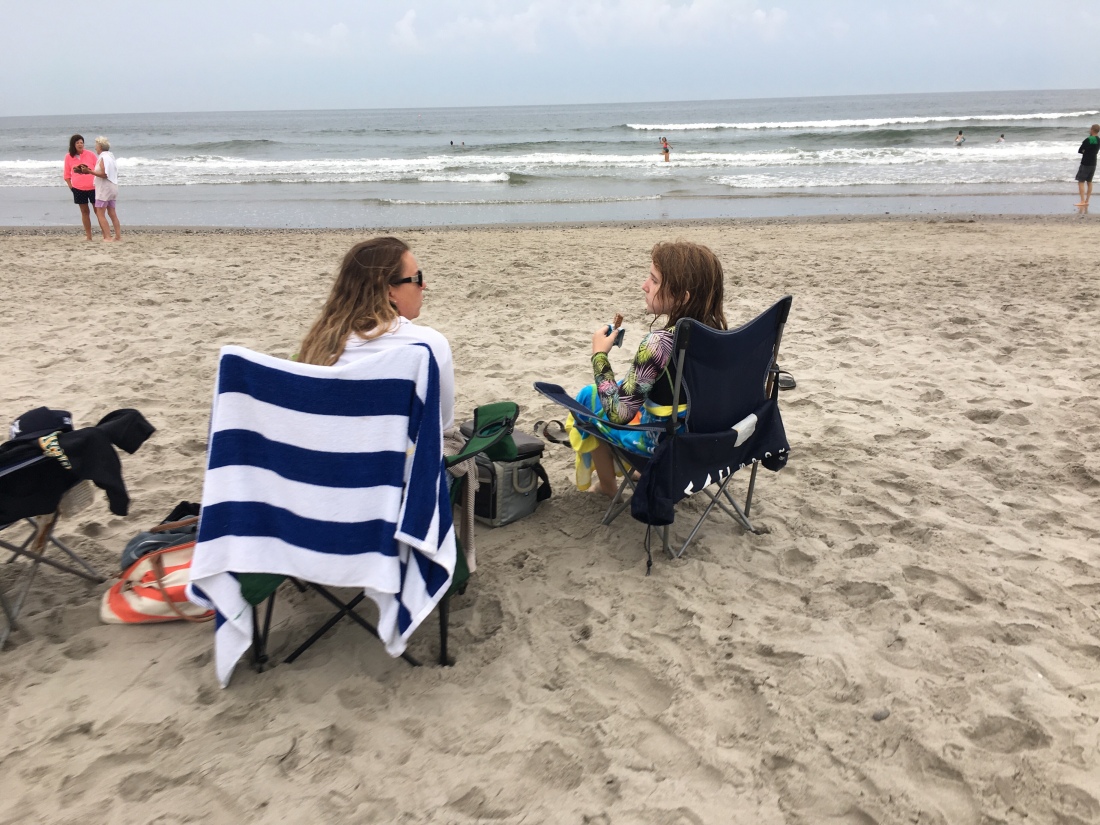